Call him park ranger, forest ranger or simply a nature defender. His mission: protect an area rich in biodiversity such as a national park or a private reserve, sometimes risking his life to do his job.

What does the daily life of a ranger look like?

At what time does he get up?

What kind of food does he eat?

Does he tour the park with his 4×4 like a safari guide?

You may be surprised.

The day starts at dawn at the operation center. First thing to do: check personal equipment. The ranger gets his specific equipment for the African bush. Never forget your belt with a flask and a knife attached. He also checks that his cell phone works fine and that the battery is full.

Every morning, rangers have to gather around the country’s raising flag. There is a bugle call and everybody has to stand at attention. The team leader then picks up the rangers who are going on a 3 days patrol in the park.

The team needs a driver, a team leader and operators. Rangers go on patrol with a used pickup truck and several Chinese 125cc motorcycles that aren’t suited for off-road at all. They all have to check their vehicles – gas, oil, mechanical issue – each time before leaving the operation center.

The unit’s leader briefs his team : patrol type, duration, etc. Then, the chosen rangers have between 30 minutes and 1 hour to pack the equipment for everybody, fill up waters and gas cans. A cook is named and is in charge of bringing enough rice and pastas, as well as sauce and tea. They cannot afford a more varied diet due to the lack of funds from the government.

During our mission in Niger we had to adapt to the rangers’ diet. Pasta or rice for breakfast, lunch and dinner. Sometimes they bring a sardines can and throw one fish in the pasta, then it is shared between 12 people. The luckiest ones can find a piece of sardine in their plates, others don’t.
After 8 days of this low proteins diet, we began to feel weak. We had to order several chickens to get some proteins and be able to finish the training program for the rangers. Somebody had to go on a bike to a village 30 km away from the operation center to bring us some chicken. This is what daily life looks like in rural communities of West Africa.

There is another ranger in charge of the radios test and battery check.

Another ranger is responsible for firearms. He checks if everything is ok, writes down the number of the gun and the name of the ranger carrying it. He also gives them the ammunition. Here again, the lack of funds is an issue and the rangers have to ration the bullets.

The patrol team brings some axes to clear off the tracks from trees uprooted by elephants. When rangers are on foot, machetes will be used to clear the way if the vegetation is gets dense.

Before leaving, the team leader gathers everybody to give information about the itinerary and the spot where they are going to camp for the night. This information is not revealed before to avoid leakage and a possible ambush. Then the pickup truck and motorbikes move forward in a convoy.

Front of the convoy detects tracks

The motorbike in front of the convoy look at animal or human tracks. There are lots of animal tracks in the morning, besides it’s the moment of the day you could come across an elephant. On afternoons, it’s more common to encounter buffalos. On the other hand, lions, cheetahs or leopards are far more discrete.

Tracks going in the same direction of the road are often cars, motorbikes or bicycles. Local villagers often use roads crossing national parks. The interesting human tracks are those crossing the road, which indicates that somebody is moving through the bush trying to avoid the trail.

On the pickup, rangers scan the horizon

Standing at the back of the pickup, the rangers benefit from the position to spot evidence of human activity in the bush, like a bush fire or a camp fire. Vultures often indicate the position of a dead animal. Most of the time, it’s a kill by lions or hyenas, but sometimes it’s a poached animal. While patrolling on the pickup, rangers also have to scan the bush in case someone would try to escape.

Depending on the spot, the team leader decides to split the team. Some of the rangers continues the patrol on foot, the other half leaves with the vehicles to set up the temporary camp for lunch. 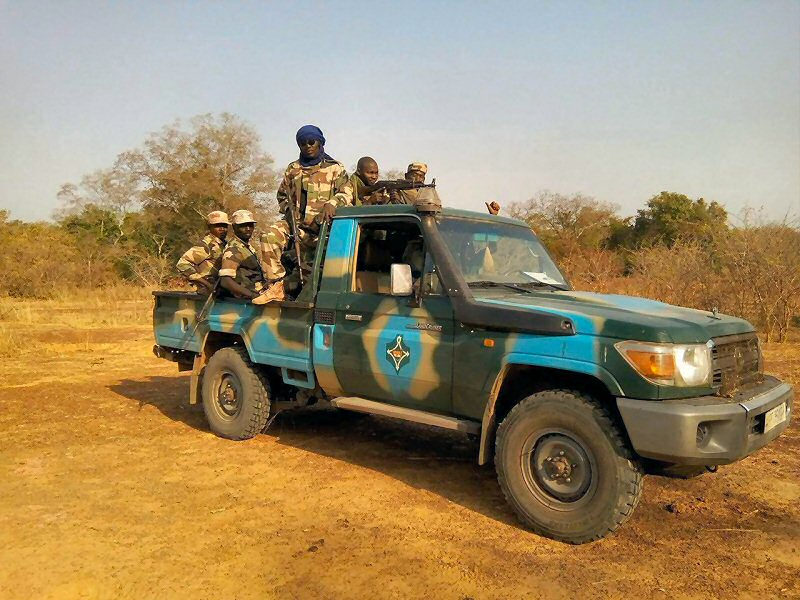 When a poached animal is discovered, rangers are taking pictures and they mark the location on the GPS. We raise awareness among rangers of traps that poachers are leaving behind, not only to catch animals but also to wound park rangers. For instance, if they see a plastic bag, they should collect it with a stick in case there is a hidden trap that could tear a ranger’s hand off.

You probably wonder why rangers don’t hide and wait for poachers to retrieve their traps. Simply because there are too many of them. During a patrol in Uganda at Murchinson Falls National Park with the Uganda Wildlife Authority, we discovered more than 20 traps in less than 3 hours. Ambush poachers is close to impossible with that number of traps and a handful of rangers.

On foot patrol arrives at the camp between 1:00 PM and 1:30 PM. They picked a spot under the trees or installed a tarp to avoid the burning sun. In West Africa, temperature can often exceed 40°C.

Active protection of the camp is organized with one ranger in a tree to watch if something is going on in the bush. Two other rangers have to watch the surroundings. They alternate in order to allow every team member to rest during the warmest hours of the day.

They repack and start heading to the sensitive area where it has been decided to set up the camp for the night. The pickup truck and the motorbikes form a convoy and leave.

The convoy stops. A small team leaves on foot and scout. Rest of the team keeps on patrolling with the vehicles and goes away from the zone.

The on-foot patrol explores the site and secure everything, then give the green light to the vehicles when it’s ok to gather on the bivouac site.

As for the temporary camp during lunch time, a handful of rangers installs the tents and cook, the rest of the team goes on patrol all around the area and comes back when it’s dark.

Poachers are often active at night, especially when there is a full moon. Rangers have to stay on guard.

In 2016, during our Operation Lion Squad in the W National Park of Niger, we were on the path to our bivouac spot when we heard a gunshot from the bush. Everybody was in a state of alert, our team hurried to reach the gunshot zone. An elephant is on the ground, giving its last breath. We couldn’t do a thing, the poacher shot him in the head, probably from a tree. Poachers were already gone, they escaped on the Niger River flowing along the park.

We shot this footage when we arrived on the crime scene :

The camp is ready for the night. Fire is burning and the pasta is heating. Matresses are placed under mosquito nets – malaria is still around – and tarps are installed during the rainy season.

After the meal and the mint tea, the team leader organizes watchkeeping for the whole night. Rangers alternate in order to have enough rest. They also cover the vehicle with a camouflage netting and hide the bikes in the bushes. When on a mobile patrolling (each night they camp in another area of the park), they keep the fire burning all night to drive away lions and hyenas.

The 2nd and the 3rd days are pretty similar. On the 3rd day, rangers come back to the camp in the late afternoon.