At least one poacher was shot dead by the BDF (Botswana Defence Force) on the border between the Chobe National park in Botswana and Zimbabwe. Two other poachers managed to escape towards Zambia, where they came from, but they were stopped by the authorities from Zimbabwe.

According to the representative of an NGO based in Victoria Falls, the two poachers were completely dehydrated and exhausted when they took refuge in a lodge in order to go to the police. In very poor condition, they told the authorities they were lost in the bush after being shot by soldiers of the BDF. They acknowledged having sabotaged a pump in the Matetsi area in Zimbabwe to try to get water.

The two Zambians are actually part of a team of several poachers, some of whom managed to escape and take refuge in Zambia after being severely hung in Botswana. It could be that several poachers were injured during the confrontation. The authorities from Zimbabwe who carried out the arrest of the two individuals have confirmed the arrest but did not give any detail.

Each year, poachers groups from Zambia, use the rainy season to lead intense poaching operations on elephants and rhinos. Demand for ivory and horns being increasingly strong, criminals don’t hesitate to travel long distances to reach the places where the “matter” abounds. The wildlife sanctuaries such as parks of Hwange, Matetsi and Zambezi in the northwest of Zimbabwe, Chobe in the north of Botswana and Linyanti and Babwata in the extreme eastern Namibia are very interesting targets for these poachers. 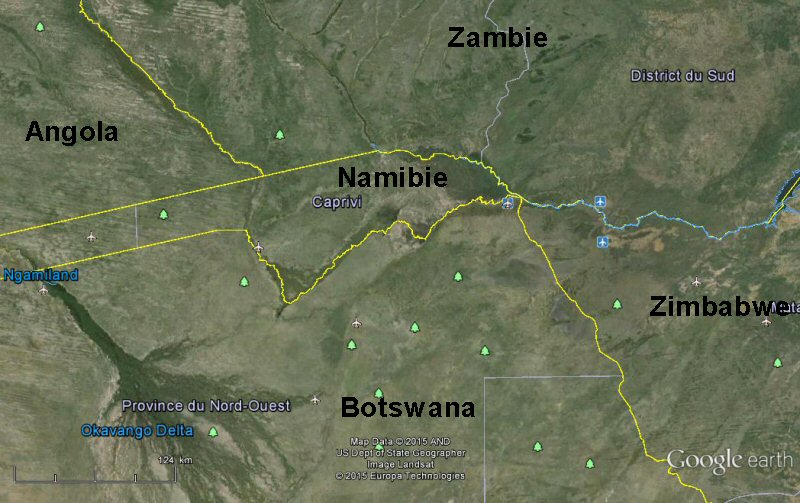 As shown on the above map, the main difficulty in this area is to consolidate around these national parks no less than five countries: Angola, Zambia, Zimbabwe, Botswana and Namibia that insinuates in this region by the Caprivi strip. This situation makes difficult the protection of these areas as poachers always operate “abroad” and can come back quickly to their home country after completion of their misdeeds.

In March 2015, three Zambians were killed in the Hwange National Park by anti-poaching forces in Zimbabwe.

More recently, in September, two Namibian poachers were shot dead by the BDF. This operation sparked a wave of protests from Namibia, the government requesting detailed explanations from his Botswana counterpart. The President of Botswana has always had a very clear and offensive language against poachers. The fight against poaching is ensured by the army, the Botswana Defence Force, and the soldiers are taught that in case of meeting with armed poachers, not those who simply put traps, they are allowed to shoot. Their method is very often criticized by the governments of surrounding countries, South Africa, Zimbabwe and Namibia. However it is the country with the least damage to its animal population, yet very rich.

Angola and Zambia have already complained to the Botswana authorities for their radical behavior regarding the poachers. The President of Botswana is not planning at all to change its policy on the treatment of poaching in his country. Criminals should take this into account if they don’t want the final meeting of their life with the BDF.