I mentioned in a previous blog post the links between poaching and terrorism (see the Jihad white gold). The proof is once more made that terrorist networks have deliberately opted for wildlife trafficking to finance their exactions.
Joseph Kony, the formidable Ugandan warlord responsible for the abduction of ten thousands of children, and the massacre of so many civilians, found in ivory poaching a lifeline to get out of his current situation.
After a three decades war against his government that he considered illegitimate, and after being indicted for crimes against humanity by the International Criminal Court, Kony was forced to leave his country, Uganda, to go into exile close to his friends in a remote area of southern Sudan called Kafia Kingi.
Through the testimony of a former lieutenant now repented, we know much more about the financing of his terrorist organization, the LRA (Lord Resistance Army) in rebellion against the Ugandan government to set up a regime based on the 10 commandments of the Bible.
The defector explained in details how Kony obtained weapons and ammunition in exchange of ivory tusks that his troops had recovered. His lieutenant spent over 27 years in his service as a member of the ivory poaching unit. He scoured with his team the Garamba Park, located in the far northeast of the DRC to hunt elephants. They also killed the rangers who protected the elephants, whose numbers fell by 20,000 in the 60s to less than 2,000 at present. 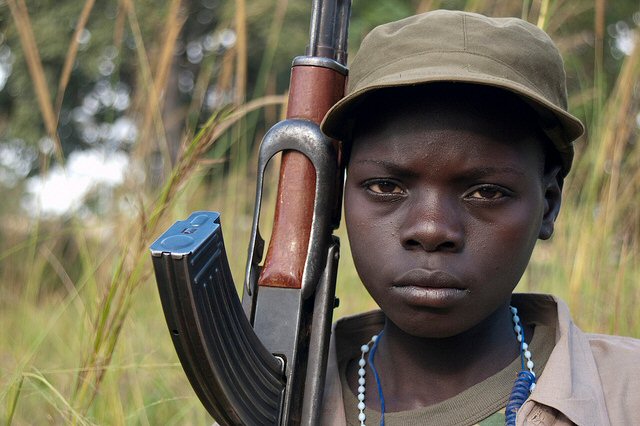 Image of a child soldier used by the warlord to perpetrate numerous crimes, especially elephant poaching in Congo.
The team of poachers, composed of children and older leaders, was in full immersion in the Garamba Park. The traffickers were living by eating bush meat and especially elephants meat. For the LRA, this trade was both easy and rewarding. The tusks were quickly routed to nearby Sudan, and they traded their ivory stock in exchange of uniforms, weapons and ammunition in large quantities. Sudanese were selling all the ivory to middlemen and then it was shipped to the Chinese market and the Gulf countries, their earnings allowing them in particular to stock up on weapons to equip Sudanese Janjaweed, Islamist terrorists and members of the LRA of Joseph Kony, Christian terrorists.
Arms, dirty money and ivory trafficking has no boundaries, no religion!
Asked how many elephants his unit has slaughtered, the former poacher explained that they killed on average one animal per week, but with time, they were experiencing more and more difficulties because the elephants were suspicious.
For information, according to a source from an international NGO present in the DRC, nearly a hundred elephants were poached in the Garamba Park in 2015, but I think it would be wrong to attribute all the crimes to the LRA, Sudanese Janjaweed have also their responsibility.

Map showing the route of ivory from the Garamba Park until Kony’s headquarters.

The flow of ivory is then as follows: from Garamba, tusks go through the northern DRC, then through the east of the Central Africa and continue their journey to the fiefdom of Kony in Kafia Kingi northwest of South Sudan.
The split of Sudan has somewhat disrupted the business of Kony. This is why ivory is moving rather through the Central Africa than through South Sudan. His headquarter is located in a sparsely populated area, relatively far away from everything, from where he can escape quickly by joining Sudan or hiding in Central Africa. Kony has been an ally for years of Sudanese President Omar al Bashir. For decades, the regime in Khartoum has armed and helped the LRA in its destabilization campaign in northern Uganda, supposedly in retaliation for the support of the Ugandan government for the separatist rebels of Darfur.
Although President Bashir would not admit today to still be the ally of Kony, a lot of evidences show that the troops of the warlord are always protected by the Sudanese soldiers, who help them in the shipment of ivory towards Asia and the Gulf countries.
Elephant poaching is now a “lifeline” essential to the survival of Joseph Kony’s army. It is so important for this chief that he has even placed his two sons at the head of the traffic.
Many fighters have left the ranks of the LRA and Kony needs fresh troops but also advanced weaponry. He took refuge in DRC and South Sudan because he can’t return to Uganda, his home country. Ivory is his only option to stock easily and quickly. The presence of US troops as reinforcements in Uganda has contributed largely to his exile in neighboring countries.
But the unrest in the Central Africa, the DRC situation and his friendships in Sudan still offer him enough leeway to massacre number of elephants in the Garamba park, but also those who remain in the few reserves of Central Africa.
I will address in a coming post the situation in the Garamba park from the point of view of anti-poaching rangers.